The Association for Financial Professionals (AFP) hosts the largest annual networking conference worldwide for corporate finance professionals. With more than 7,000 attendees and over 250 exhibitors, the 2018 AFP Conference was the biggest AFP event in history.

The AFP Conference is held in a different city in the U.S. each year. This year’s event was held Nov. 5-7 at Chicago’s McCormick Place — the largest convention center in the United States.

“The last time we were in McCormick Place was 2001, so we were excited to be in the new West building for 2018,” said Melissa Rawak, Association for Financial Professionals’ managing director, marketing and meetings.

Rawak said that AFP typically books event space ten years out, due to the size and scope of the event. The organization tries to follow a pattern of coast to coast, including middle of the country, when selecting its cities.

In 2019, the conference will be held in Boston. The Greater Boston Convention and Visitor’s Bureau had a table set up outside the exhibit hall, providing information on the destination to help get returning attendees excited.

I asked a number of conference attendees about their primary reasons for attending. The answers ranged from sessions, certification, networking and learning about solutions that might help them with their daily work to “the parties!” Similar to many industries, buyers are highly sought after by suppliers, so corporate treasury professionals are often deluged by invitations to attend dinners, soirees and other hosted activities during the event.

“The content is the big draw for me,” said one representative from a large international bank.

She added, “The keynote presenters are amazing, plus there are sessions on AI, blockchain and other emerging technologies that I’ve found very educational. But I also really enjoy seeing all the different companies in the exhibit hall. I come [to the AFP Conference] for re-certification but also to learn new things.” 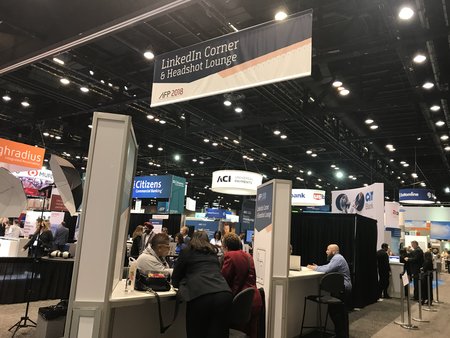 Giving back is important to AFP. Each year, the conference offers an “AFP Aware” community service project. AFP Aware gives back to the region where the conference is taking place by partnering with a local nonprofit organization. 2018 marks the ninth consecutive year that BBVA Compass has sponsored the event.

The partner selected for 2018 was A Safe Haven Foundation (ASHF), which provides shelter and services to Chicago-area residents who are struggling with homelessness, addiction, abuse and other issues. For the onsite project, volunteers assembled 900 hygiene kits that were given to homeless individuals throughout the greater Chicago area.

In the exhibit hall, AFP Aware offered “PaintFest,” an area where attendees could paint pre-drawn murals provided by the Foundation for Hospital Art. The murals will be donated to children’s hospitals across the country.

Personal and professional well-being were also underlying themes at the event. The Wellness Zone offered tips for eating healthy with a busy schedule, relieving stress in the workplace and boosting energy throughout the workday. In the LinkedIn Corner and Headshot Lounge, attendees were given the opportunity to meet with consultants to help boost the impact of their profiles and get professional headshots as a finishing touch.

The event balanced exhibit hall time and sessions as well as can be expected when attendees are seeking certification credits. More than 130 educational sessions were offered, covering topics ranging from AI, blockchain and cybersecurity to the impact of U.S. tax reform of treasury. Sessions were divided into three categories: operational, strategic, and “mindshift”/disruptive.

Featured keynote speakers included Daymond John, founder, president and CEO of FUBU who appears as an investor on the ABC reality television series “Shark Tank,” and former American NFL quarterback Peyton Manning. The line for people to meet Manning after his presentation was easily half a mile long, snaking through the exhibit hall (conveniently passing several bars set up for the evening exhibit hall reception). Planning is already well underway for the 2019 conference. The call for proposals for educational sessions is open through Jan. 2019, and the association is putting together its AFP 2019 Conference Planning Task Force to finalize the schedule. Rawak explained that the task force comprises corporate treasury and finance professionals who specialize in some manner within the seven different educational tracks offered at the event.

The exhibit hall is also a primary planning focus. AFP uses the priority points system for exhibitors to select space for the upcoming year while onsite at the event. This allows loyal exhibitors and those who also engage in other forms of business with AFP, such as advertising, to book space earlier than newcomers. Each exhibitor is assigned a timeslot for rebooking, and can choose from all available spaces with a 30+ day no-penalty opt-out.

“The AFP annual conference is the highest attended corporate treasury and finance event in the country, so if a financial institution or service provider is looking to have one-on-one conversations with practitioners, this is where they need to showcase their products and services,” said Rawak.

She continued, “With over 80% of the exhibit hall floor already sold, we’re [also] excited for another strong year of exhibitors.”

The 2019 AFP Annual Conference will be held October 20-23 at the Boston Convention and Exhibition Center.