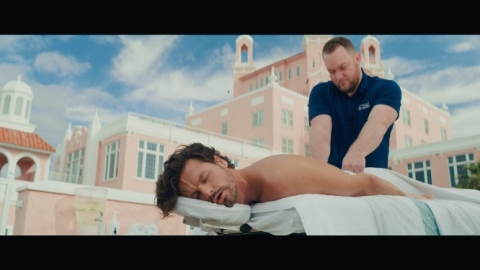 Visit St. Pete/Clearwater President and CEO Steve Hayes can’t say for certain that the new Amazon Prime Series, “Life’s Rewards,” has a happy ending. While not familiar with all of the plot points, Hayes is certainly hoping for the best out of the series, which debuts May 10.

You see, not only does “Life’s Rewards” – comprising eight 10-15-minute episodes – showcase the destination, it is the first original scripted series developed by destination marketing organizations for streaming services.

The idea sprung from one simple question, Hayes recalled: “How do we tell our story differently?”

At the same time that the CVB was kicking around answering that question, Visit Florida began talks with production company Odyssey, the Studio at Miles Partnership, about creating a streaming series. When it became apparent that Visit St. Pete and the statewide tourism bureau were thinking along the same lines, everything fell into place.

In the show, Dan Kinney, played by actor Sebastian Rocha, is stranded at The Don CeSar on St. Pete Beach, ranked the No.1 Best U.S. Beach in 2021 by TripAdvisor. In his journey to prove his worth, the main character travels to many of the destination’s most popular attractions, including the famous pier and Dali Museum, as well as Hayes’ office to make some phone calls.

The idea is to entertain and to spark an interest in travel to the Florida hot spot. Hayes, a big fan of the series, “Yellowstone,” loved the idea of showcasing the destination in a nontraditional way. The aggressive marketing move comes as the country emerges from the pandemic, which took hold three months after Hayes left Visit Pensacola for his new leadership position.

“This is great timing,” Hayes said of the show’s release. “Had we tried it last summer, it would not have been the best timing.”

Just as with any production – the region is popular for filming Hallmark films, according to Hayes – the CVB and St. Pete/Clearwater Film Commission facilitated filming at the 20-plus venues. The series debuted at the Sundance Film Festival this winter.

The CVB will be eagerly tracking views and downloads on Amazon Prime, YouTube, GoUSA TV and Places.Travel. Hayes noted the example of his wife spreading the word on social media is an example of word-of-mouth benefiting the show and the destination. “I have got to get to Florida,” are the words Hayes hopes to hear from viewers after the eight episode run.