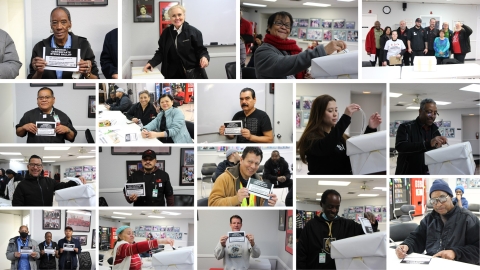 The Las Vegas Convention Center has become the second facility following Orlando’s Orange County Convention Center (OCCC) where unionized Sodexo food service workers have voted 100% to authorize a strike if a contract is not reached through ongoing negotiations.

The announcement was made late Friday, Dec. 9 by Culinary Workers Union Local 226, affiliate of UNITE HERE!, following two days of voting by cooks, dishwashers, banquet servers, concessions cashiers and other workers employed by Sodexo and working at the LVCC, claiming that their wages are not enough to keep up with the cost of living.

“I voted to strike because we are the ones that make the convention center successful, and we want to get a fair share of that success,” said Dylan Schoenhard, banquet server for Sodexo at the LVCC. “We have been busy at the convention center, with big shows like [the Consumer Electronics Show] CES coming soon, but we need higher pay because everything is so much more expensive now, especially rent and housing, and we don't want to be treated like second-class workers.”

According to Ted Pappageorge, secretary-treasurer for the Culinary Workers Union, convention business is booming again at the LVCC after the COVID-19 pandemic, and Culinary Workers Union members work tirelessly to provide the best service. Additionally, a recent Sodexo report highlighted a “strong increase in revenues and profitability in fiscal 2022.”

Paul Pettas, vice president of brand and communications for Sodexo, reaffirmed that the unanimous vote in favor of a strike is not a declaration of a strike and that negotiations are ongoing.

According to Pettas, Sodexo is confident that these negotiations will not affect CES and the level of service it provides to attendees, exhibitors and all those who are joining the company at the LVCC in the months ahead. CES, set to take place at the LVCC Jan. 5-8, is expected to attract up to 100,000 attendees this year.

“We are fully committed to reaching a new collective bargaining agreement (CBA) for UNITE HERE! members and doing so before CES in January,” Pettas said. “Decades of positive, collaborative union relationships have taught us that progress takes place at the bargaining table with strong engagement from both parties.”

He added that despite Sodexo’s continued good faith efforts, UNITE HERE! leadership only provided a proposal on wages and benefits on Nov. 30—three months after the expiration of the previous CBA—and has not yet agreed to any of its proposed bargaining dates in December.

“We remain fully committed to helping secure long-term vitality for the individuals who have careers with us at the Las Vegas Convention Center and continuing to be economic catalysts for Las Vegas and the Southern Nevada economy,” Pettas said.

According to Pettas, Sodexo is working to forge a path forward with its food service workers as it engages in ongoing conversations with union representatives to prevent strikes at the five convention venues and assured event professionals that their events at any of these facilities will go on smoothly as planned in the coming weeks.

Meanwhile, Pettas pointed to Sodexo’s newly launched People Ambition program, which is the company’s renewed promise to its current and future employees. The initiative includes enhanced compensation, rewards and employee benefits, and will also include bolstered career development opportunities and other employee-centric enhancements.

“We believe this will help ensure Sodexo continues as the No. 1 hospitality company for employees in the hospitality industry,” he said.

Additionally, Pettas said Sodexo received a perfect score on the 2022 Disability Equality Index (DEI), was named by Forbes as a 2022 Best Employer for Diversity and was acknowledged as a Best Company for Multicultural Women by Seramount.

Don’t miss any event-related news: Sign up for our weekly e-newsletter HERE, listen to our latest podcast HERE and engage with us on Twitter, Facebook and LinkedIn!