The Power of Participatory Music: Greater Engagement for Corporate Events 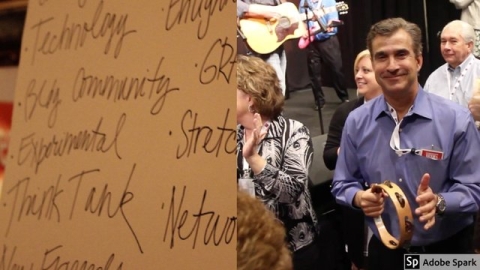 Music is known to bring people together. Studies, including this one, have shown that music increases feelings of inclusion, connectivity, positive affect and also increases endorphin release – adding to those overall positive feelings. Furthermore, the study finds that singing together fosters social closeness, even in large group contexts where participants are strangers to each other.

Incorporating music into corporate events is a great way to bring your audience together. Most event organizers play music to get attendees pumped up for a keynote or keep them awake in the afternoon. But why stop there – why not get attendees involved in creating and performing songs?

The first experience I had with participatory music at an event was at the EventCamp National Conference in Chicago, back in 2011. During the opening session, we worked with Billy Kirsch, president of Kidbilly Music, to create a theme song for the event.

Kirsch is a Grammy- and Emmy-nominated, Country Music Award (CMA) and Academy of Country Music (ACM) award-winning songwriter. He founded Kidbilly Music to specialize in teambuilding and helping corporate and non-profit clients create songs about the work they do. The company has offices in Nashville, Chicago and Los Angeles and primarily does business in the North America.

I asked Kirsch about his views on the value of music for corporate events. He is passionate about the power of songwriting and of music to leave a deep emotional imprint.

He continued, “By the time the song is done and you’re singing it, you’ve internalized your values so you can better describe them to customers.”

Kirsch gave an example of first working with a smaller executive group to craft a song about and for the company to help boost morale, or to help illustrate a change in the company’s direction.

The executive team took surveys and solicited input from key players throughout the organization to help put together a message about what the company’s differentiators were, why it was great to work there and how they are helping to change the world. At the company’s annual convention, the song was unveiled and performed onstage by Kidbilly, along with the story behind its creation.

“Never underestimate the power of music to motivate.” Kirsch said.

He continued, “When you’re involved in creating something, you’re highly engaged – you can’t fake that. Clients who feel like their voices are being heard are motivated and excited, and leave with a heightened sense of engagement and involvement.”

The group songwriting session at EventCamp encouraged all of us to think about how we wanted to portray ourselves as members of the #EventProfs community and what that community’s values were and should be. It was fun, engaging and helped make the diverse group of attendees, many of whom only knew each other from their Twitter presence, knit together.

Wallace wanted to incorporate interaction and something different into the General Sessions. The organization was looking for a unique, fun and engaging experience for attendees, rather than just featuring a speaker or pure entertainment. Kidbilly offered a unique way for them to get their attendees involved in the kickoff portion of the General Session.

“All four of the General Sessions in which Kidbilly performed were greatly enhanced by the experience,” Wallace said. “No one had any idea what to expect and Kidbilly delivered.”

He continued, “Attendees were eager to participate and Kidbilly successfully led the audience in writing a custom-tailored song, on the fly. These gifted songwriters gave our attendees a unique and relevant experience which undoubtedly produced a lasting memory - all within the allotted time.”

In September, I attended an evening event hosted by the Senior Professionals Industry Network (SPIN), which featured Rock and Roll Team Building.

Based in Australia, Rock and Roll Team Building is the brainchild of Irish-born Ciaran Gribbin, a Grammy-nominated songwriter and performer. As well as being a solo performer, Gribbin was appointed as the lead singer of INXS in 2011.

Gribbin divided the more than 40 attendees into smaller subgroups and had each group sing a specific, short melody. When combined and added to his live lead vocals, it created an impressive harmony.

The group also created a song with different audience members contributing each line of lyrics and everyone else singing back-up in harmony. While our finished effort wouldn’t have won any awards, it was a fun activity and a memorable evening. As a finale, three brave volunteers were dressed up and performed karaoke with an audience sing-along.

She added, “Our clients consistently tell us they are not sure what they are going to do for the following years event after Rock and Roll Team Building. We love that we throw down a challenge like that and love that we get to use the universal language of music to bring people together!"

Another well-known contributor in this space is SongDivision. Founded in 2003, SongDivision has a strong international presence, with corporate clients including Microsoft, Pfizer, Coca-Cola and KPMG.

I had a conversation with Jessica Levin, SongDivision’s chief marketing officer, to find out more about how they operate.

“We can come in and help your team communicate with music,” Levin said.

She continued, “First you go through the exercise of writing the song. You can then have one of SongDivision’s bands play at a reception or party later on in the event and include the song your group created. Your team gets to perform onstage with a real band – making them rock stars for a day.”

SongDivision is also focused on business outcomes and helping clients articulate and communicate their own culture and core values. The groups can and often do co-write the songs along with the SongDivision team. Their Song Slam offering can then help bring the creativity and the performance together.

Christine Becker Anderson, CMP, event manager at Siemens, has used SongDivision for a couple of different groups and wants to work with them again in future. Her groups loved the experience of being rock stars, and she enjoyed watching the closet musicians and songwriters develop through the creative process.

“They aren’t always the most outgoing people in the group, so you get to watch them emerge and their creativity is allowed to blossom,” Anderson said.

She added, “It is the best team building event I’ve done in my 25+ year career as a meeting planner. As a planner, your whole reputation is staked on your vendors and I felt very confident about everything flowing smoothly with SongDivision – which it did.”

Kirsch stressed the importance of finding a vendor you feel comfortable working with. He believes in cooperation versus competition.

“For the experience to be truly engaging and authentic, it needs to reflect who you are and who your listeners are,” Kirsch said.

He continued, “There Is plenty of business to go around, so make sure you find the right fit for your company. You’re co-creating something, so you need to find an organization that will listen to you, work with you and act as your business partner in bringing your ideas to life.”