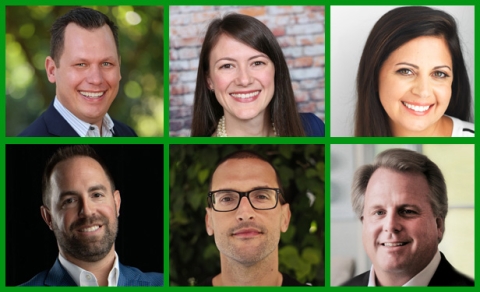 Across the corporate meetings industry, new and established event professionals alike are continuing to find exciting career opportunities at organizations far and wide. Take a look!

Since joining EMP in 2009, Daniels has helped grow and enhance its client events by drawing on her 30 years of event and hospitality experience, including her time as convention services director at Walt Disney World. She has worked with such well-known companies as Schneider Electric, SAP, Commvault, Ciena, ExactTarget, Citgo, Hewlett-Packard, Honda Equipment, the Port of Long Beach and Symantec, to name a few.

EMP Founder Gordon Stake will continue with the firm as managing partner.

Ahead of its 2022 opening, Four Seasons Hotel and Private Residences Nashville has appointed Richard Poskanzer as general manager. He will oversee the development of all hotel amenities and experiences as well as the service of 143 Four Seasons Private Residences, which are also scheduled for occupancy beginning in early 2022.

In 2014, he assumed the role of director of food and beverage at Four Seasons Hotel Westlake Village, Calif., and was later promoted to hotel manager in 2017.

Jonny Westom has joined Sonoma County Tourism (SCT) as vice president, business development, responsible for overseeing its development team. He previously served as president of Visit Dana Point, where he oversaw a rebranding of the organization, implemented a group and meetings strategy that resulted in a $6 million impact and expanded the tourism improvement district to equally promote all hotels in the destination.

A seasoned industry professional with more than 30 years of experience working with associations, Nancy Rosenbaum started her career working with hotel and destination sales. Before her previous role as an event and business development strategist, she worked as a global account strategist for Maritz Global Events before ultimately serving as the company’s vice president for six years.

Rosenbaum will work alongside sales and business development professional Bill Sheehan, who brings more than 25 years of executive management experience with trade associations and technology companies, as well as in-depth knowledge of nonprofit management functions, to his new role.

As director, hotel relations and services, David Taylor will serve as a customer liaison to Boston’s hotel community. He brings extensive hotel industry experience to his new role, including sales and marketing leadership roles at New York and the Boston/Cambridge area properties, including Swissotel/Raffles International, The St. Regis Hotel, New York Palace Hotel, The Ritz-Carlton New York, The Charles Hotel and most recently the Kimpton Nine Zero Hotel.

Neil Schriever has joined the citywide convention sales team, serving Washington, D.C.-area customers. He comes to the BCMC with comprehensive CVB, venue and global hotel sales experience, previously serving as senior vice president of the Providence Warwick CVB, director of sales and marketing for the Chubb Conference Center and most recently as a global account executive for Marriott International.

Jessica Parr has returned to the citywide convention sales team as sales manager, responsible for bringing citywide events to the Boston Convention and Exhibition Center and John B. Hynes Veterans Memorial Convention Center. Prior to her work with the BCMC, Parr spent 19 years in sales with Hilton Hotels in the Boston area and in San Francisco.

Verrilli brings more than 18 years of leadership and business development experience to his new role, including more than 10 years of experience in the marketing industry. Prior to joining Impact XM, he served as vice president, client partnerships with the ASTOUND Group, where he was responsible for procuring profitable business and the retention of A-list clients including CBS, Porsche and Adidas.

Julius Solaris has joined Hopin as vice president of marketing strategy, events, responsible for supporting the continued growth of the tech company’s all-in-one event management platform and guiding core marketing strategies including content and partnerships across its event solutions.

An influential industry executive who brings deep experience to the events side of Hopin’s multi-product portfolio, Solaris most recently served as the head of engagement at Swapcard and is the founder and former editor-in-chief of EventMB. He is also a keynote speaker and author of 10 books on event technology and innovation.

The Philadelphia Convention and Visitors Bureau (PHLCVB) has promoted Maria Grasso to senior vice president, convention division, responsible for leading the convention sales and services team in growing convention bookings while positioning Philadelphia as a premier destination for meetings, conventions and events.

A more than 20-year veteran of the organization, Grasso joined the PHLCVB in 1999 as senior director of national accounts and most recently served as vice president of sales and convention services. Prior to joining the PHLCVB, she served as regional director of sales for Vista Host Hotel Management.

Events and association leader Megan Martin has joined virtual and hybrid events SaaS technology company JUNO as an account executive. An event strategist with advanced training and extensive experience in strategic meeting management, event development and planning, virtual and hybrid events, educational programs and association management, Martin will work alongside the company’s team in pushing the boundaries of events through technology.

Before coming to JUNO, Martin held event management and directorship roles at a variety of organizations including RingCentral and the National Conference of State Legislatures, among others.