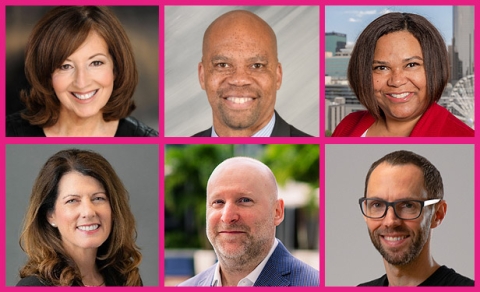 The rush to rebuild staff and grow leadership teams at event-related organizations continues in full force, as companies and CVBs anticipate a busier and more profitable 2022. Take a look!

Destination DC (DDC) appointed William Adams as its new director of convention sales, responsible for driving convention business and developing sales policies and programs to bring meetings of all sizes to Washington, D.C. Working alongside DDC’s vice president of convention sales and services, Melissa A. Riley, he will also oversee the CVB’s convention sales team.

Bringing more than 15 years of experience in the attraction, tourism and hospitality industry, as well as a successful career in convention sales to his new role, Adams most recently served as national sales manager with the Las Vegas Convention and Visitors Authority (LVCVA), where he oversaw 800 active accounts and spearheaded the CVB’s events, sales missions, site inspections and fly-ins.

The Gabriel Miami, Curio Collection by Hilton appointed 30-year hospitality veteran Duncan Clements as its general manager, responsible for driving all aspects of hotel operations and guest satisfaction for the downtown Miami hotel. He has held roles at major hospitality establishments across the globe, including properties in London, Abu Dhabi, Glasgow and Birmingham, U.K.

Most recently, Clements was general manager at the Hillsboro Beach Resort in South Florida, where he served as the opening manager. He has also managed large destination hotels, including the Elms Hotel and Spa in Excelsior Springs near Kansas City and the Yve Hotel in Downtown Miami. Clements also worked with Kimpton for 10 years, which brought him to notable properties in Chicago, Florida and Texas.

As national sales manager, Danielle Appley-Epstein is responsible for selling and marketing Atlanta as a premier destination for group meetings requiring 251-1,200 rooms on peak, focusing on East Coast markets and representing ACVB at events and trade shows. In her previous role as national sales manager at Omni Atlanta Hotel at CNN Center, Appley-Epstein managed Midwest markets, working with major trade associations for some of the largest meetings and conventions in the U.S.

Amanda Dyson has been promoted to director, membership, corporate events and visitor services, responsible for leading recruitment and retention programs for current and prospective members. She will also manage industry event planning and is responsible for the daily operations of the visitor information center in Downtown’s Centennial Olympic Park. Her tenure with the ACVB began in 2004 as marketing manager before holding roles in international and domestic tourism and joining membership in 2017.

As manager, facilities, Janine Douglas will oversee all ACVB facilities, including the visitor information center at Centennial Olympic Park, and manage vendor relations. She joined ACVB in 2009 as administrative assistant, corporate events and development as well as community and governmental affairs, supporting three vice presidents. She was promoted to coordinator in 2005 and has provided support to some of ACVB’s major events.

Bringing more than 20 years of experience in customer, digital technology and operations leadership in both growth and more established organizations to his new role, Davies previously led sales, design and customer service at mobile phone and internet provider Belong. He also served as head of operations delivery for Jetstar and brings strategic capability from his time at Boston Consulting Group.

VISIT DENVER hired Flavia Light as its new vice president of tourism, responsible for leading international sales and marketing efforts while serving as a connector for Denver’s cultural community. She is also responsible for overseeing VISIT DENVER visitor centers and assisting with new tourism event generation.

Relocating to Denver from Orlando, Light most recently worked for GoPegasus, a tour operator, DMC and transportation company, where she served as director of strategic growth marketing and sales, overseeing international business development for the leisure and group segments. Prior to that, she spent nine years as marketing and sales director with Walt Disney World, Disney Destinations.

Experienced hospitality services professional Shanda Cartwright has joined the Fort Worth Convention Center (FWCC) as its sales and events manager, focused on corporate and local business and responsible for increasing the venue’s share of local meetings, events and galas.

Bringing a wide range of experience in sports, entertainment, hotels, events and catering to her new role, Cartwright began her career with Spurs Sports & Entertainment in San Antonio before moving to the Broadmoor Hotel and Resort in Colorado Springs and then the Denver Broncos. She made her way back to Texas to help open the Cowboys (now AT&T) Stadium and work with the Mavs at American Airlines Center on the 2010 NBA All-Star tournament.

She has served in sales and event management roles at Billy Bob’s Texas, Las Colinas Country Club, The Fort Worth Club and Trinity Food & Beverage, the FWCC’s exclusive catering and concessions provider.

Visit Huntington Beach (VHB), the official destination marketing organization for the city of Huntington Beach, Calif., has tapped Susan Valen as its new director of sales.

A Certified Meeting Professional (CMP) boasting several decades of experience in destination marketing and sales, Valen recently served as the national sales director for the Long Beach Convention & Visitors Bureau for the past 13 years. While at the CVB, she worked with city-wide convention, sporting, association and corporate groups to solidify the city selection and contracting for the Long Beach Convention Center as well as multiple hotels.

Prior to her tenure at Long Beach, Valen held director of sales and marketing manager positions at both Marriott and Hilton brands as well as similar positions with the IMPROV Comedy Clubs and Planet Hollywood.

Bringing extensive technical knowledge and more than a decade of experience with large city-wide events and conferences to his new position, Cascio began his career in the live events industry in 2006 as a computer technician and evolved into roles managing large-scale events as a computer and I.T. project manager as well as a meeting room project manager.

VisitPITTSBURGH has named Susan Klein its new chief marketing officer, effective Feb. 14. Bringing more than two decades of brand building and management to her new role, she joins VisitPITTSBURGH after four years as the head of content marketing for marketing and branding agency Doublespace.

Prior to Doublespace, Klein spent eight years in San Francisco, most recently serving as head of marketing communications and visitor services for the Fine Arts Museums of San Francisco, and before that, founded Oculus Marketing, where she served as its chief marketing officer. She has also held marketing and branding roles with Morrison & Foerster LLP, Citibank Consumer Assets Division, Morgan Stanley and Mastercard.