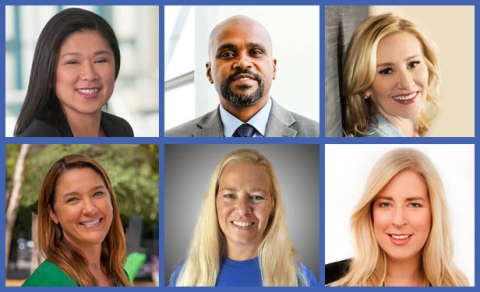 This month’s People News demonstrates that CVBs and venue management companies are among the busiest event industry entities continuing their hiring streaks as the demand for in-person meetings and events continues to surge toward pre-pandemic levels. Take a look!

Leading venue and event strategy and management company ASM Global is continuing its growth trajectory with an executive appointment and a major new hire at one of its convention center partners in Detroit.

Hoffend will work closely with longtime ASM executive Bob McClintock, who is shifting roles at ASM Global to focus on the significant planned operational enhancements in the division.

A former executive of Freeman, Hoffend oversaw one of the industry’s largest network of experts in the space. In 2021, he co-authored the international best-selling book “Who Gets It?!” The book outlines how to find, motivate and retain top talent.

ASM Global welcomed Marlon C. Wilson as the new public safety director at Huntington Place. He immediately assumes the senior leadership responsibilities of overall direction, coordination and evaluation of the department of public safety and security, taking on proactive initiatives focused on protection and service.

Additionally, Wilson will be working to train Huntington Place staff on the latest safety and security protocols for venues in conjunction with the International Association of Venue Managers (IAVM) later this year. IAVM Director of Safety and Security Mark Herrera, who oversees the industry’s Academy for Venue Safety and Security, will work with Wilson to roll out the training program at the downtown Detroit venue.

Bringing more than 27 years of law enforcement and critical management experience to his new role, Wilson most recently served as deputy chief of the Detroit Police Department (DPD) and as executive officer in both the Major Crimes and Organized Crime Divisions. He rose through the ranks throughout his career in the DPD since 1995, receiving numerous awards including Officer of the Year, forming the agency’s Cyber Crimes and Arson Units, and serving as commanding officer of the Professional Standards Bureau.

The OKC CVB is scaling its convention sales team with the addition of new convention sales manager Mandy Holt, a 10-year OKC hospitality veteran who previously served in roles at The Skirvin and the former Renaissance Hotel (now Wyndham Grand).

Stepping into the CRM database and sales coordinator position is Lydia Watkins, who graduated with a degree in strategic communications from Oklahoma State University in May 2022 and previously worked as a social media intern at Wooden Nickel.

As the third member of the newly hired trio, Randall Sweet comes to the OKC CVB as communications coordinator after graduating from the University of Oklahoma in May 2022. While in school, Sweet worked as a beat reporter for the OU Daily and as a freelance reporter.

The convention division of global engagement and marketing agency MCI USA has welcomed Jackie MacPherson as senior director, client experience. An industry veteran bringing more than 25 years of experience to her new role, she will work to support MCI’s initiative to provide premium registration and housing service and solutions to the trade show marketplace.

“Jackie’s skill set is a perfect fit for the direction we’re heading and the solutions we’re offering,” said Chris Williams, senior vice president, registration and housing, MCI USA. “We have a unique technology offering, and she’ll be helping us build out our service structure, so the two combined equate to a value proposition that can’t be found anywhere else in the marketplace.”

The Philadelphia Convention and Visitors Bureau (PHLCVB) is continuing to expand its team, most recently adding four new hires to its sales, content and finance departments.

Rhonda Walker has been named national accounts manager, focusing on the Washington, D.C., Maryland and Virginia area, and responsible for maintaining and building the corporate and association segments in the region. Prior to joining the PHLCVB, Walker served as director of sales and marketing for Experience Prince George’s County, Md., and senior sales executive for Renaissance Esmeralda Resort and Spa in the Greater Palm Springs, Calif., area.

As executive meetings manager, Kelly DeSorte is responsible for maintaining and actively building sales from multiple territories. Bringing more than two decades of experience in the hospitality industry to the PHLCVB, she previously served as senior account executive, U.S. account sales for Marriott International and held several other positions with Marriott International, including account executive and area director of sales.

As PHLCVB’s new creative copywriter, Dan Casarella oversees and executes the organization’s annual content plan, including web content, social media platforms and annual print publications. Prior to joining the PHLCVB, he served as marketing coordinator for Lightning Media Partners and as hospitality coordinator and associate producer for Jimmy Kimmel Live!.

Kareem Abdullah has been appointed staff accountant. Prior to joining the PHLCVB, he served as financial administrator for the University of Pennsylvania and collateral support for Westcor Land Title Insurance Company, focusing on data analysis and reconciliation of accounts and assignments.

Global hospitality, sports and live entertainment company Oak View Group (OVG) and its full-service venue management and hospitality division, OVG360, recently tapped a new executive and filled a major role at one of its venue partners in Florida.

Oak View Group appointed 30-year industry veteran and hospitality executive Chandra Allison as senior vice president of strategy and growth for meetings, conventions and exhibitions. In this newly created role, she will oversee the strategic growth of the OVG360 convention center portfolio as well as design and develop meeting spaces and programming for OVG’s new Las Vegas Hotel and Casino project.

Allison joins OVG following 24 years at The Venetian Resort Las Vegas, where she started her tenure as part of the integrated resort’s pre-opening team and most recently served as senior vice president of sales and marketing–MICE and leisure.

Event industry veteran Thuy Vuong has joined OVG360 as assistant general manager of the Miami Beach Convention Center (MBCC) and its associated campus. In her new role, she will initially oversee event and guest services, venue operations, sales, public safety and transportation, assisting MBCC General Manager Freddie Peterson in managing the day-to-day planning, maintaining, managing and event operations of the campus. She will also be intricately involved in contractor and client relationships coupled with a variety of strategic initiatives.

Vuong brings more than 27 years of event management, sales and operations experience at some of Florida’s most prominent event venues to her new position. As director of operations for Informa Markets, she managed everything from event logistics and signage to transportation, sustainability and security for Florida Boat Shows. Additionally, she spent more than 20 years working for ASM Global at the Greater Fort Lauderdale/Broward County Convention Center, starting as event manager and working her way up to director of sales, event services and marketing.

Previously, Vuong has held roles at The Bayfront Center: Times Arena and Mahaffey Theater in St. Petersburg, and the Orange County Convention Center and Addition Financial Arena (at the University of Central Florida) in Orlando. Prior to that, she worked at the Georgia World Congress Center, where she was appointed sector coordinator for the Atlanta Committee for the Olympic Games.

Visit Jacksonville recently welcomed 15-year convention facilities and tourism organization leadership veteran Jeanne Goldschmidt as its director of convention sales. As a member of the CVB’s executive leadership team, she will oversee the organization’s sales team and develop and execute strategies to promote and sell Jacksonville as a desirable meetings and conventions destination.

Have some event-related people news to share? Please send announcements and high-resolution headshots to lpsavas@tsnn.com.