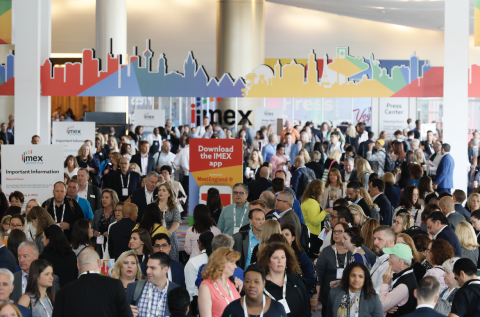 If you were flying home from Las Vegas last week, there’s a good chance you were seated next to a fellow IMEX attendee. This year’s IMEX America, held at Sands Expo and Convention Center from Sept. 10-12, drew an estimated 14,000 attendees and generated an economic impact of more than $20 million, according to show officials.

Held in Las Vegas for nine years now, IMEX included more than 3,500 exhibitors from 150 countries on the trade showfloor. IMEX Group, which organizes the show, estimates a total of 76,000 individual and group appointments took place over the three-day event. That marks a 3-percent increase in appointments over last year.

“Every year we strive to be our own competition, to push ourselves to deliver richer experiences, better education and, of course, a strong business pipeline for our exhibitors,” said Ray Bloom, IMEX Group chairman.

He continued, “Our partners keep rising to the occasion, too. We’ve seen some spectacular booths and activations this year… Their level of investment and commitment to business is remarkable.”

As with any trade show that draws travel professionals, IMEX allowed its host city of Las Vegas the chance to show off its best assets. The LVCVA exhibited in a prominent booth on the trade showfloor alongside 28 of its local partners and conducted more than 140 meetings and group presentations.

“It’s been incredible to see IMEX America’s growth over the last nine years, and it’s an honor for Las Vegas to serve as the home of this leading event as both brands continue to evolve and make impactful changes that shape our industry,” said John Schreiber, LVCVA’s vice president of business sales.

Many announcements were made at IMEX, which we will be reporting on in the days and weeks to come. Among them: the launch of Event Industry Council’s new Center for Sustainable Events, and the announcement that old APEX standards will be replaced with new EIC standards.

In addition, there was a major announcement of the event industry’s involvement in accelerating the 17 United Nations Sustainable Development Goals, as well as talk around how the industry can take action on other social justice issues such as sexual harassment and human trafficking.

The theme of diversity and inclusion also ran strong throughout the event, including several sessions held on Smart Monday titled, “She Means Business,” focused on the advancement of women in the industry on issues such as equal pay.