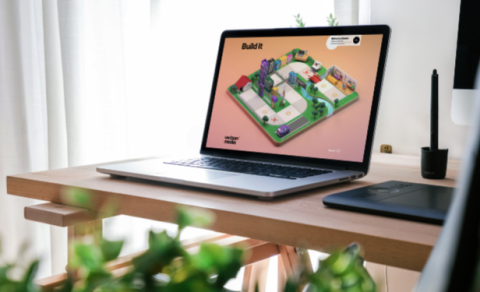 Held twice a year, Verizon Media’s flagship Build It event introduces the company’s employees from around the world to its new products and services through a mix of interactive brand experiences and inspiring keynote speakers. The event traditionally takes place at five Verizon Media campuses (four in the United States and one in London) and is also live streamed to their global offices. The most recent Build It was scheduled for April 2 but by the second week of March — with the world shutting down in response to the COVID-19 pandemic — it was obvious they were not going to be able to hold the event as originally scheduled.

The company didn’t want to cancel the event, however. “It’s important to have this internal event twice a year to let our employees know about our latest and greatest products,” says Allison Galloway, director of global events for Verizon Media.

Not being able to gather in person left only one option: a digital event. So Galloway met with MVRK, the Orlando-based experiential agency that helped create the original event, to discuss ways to take Build It digital while still meeting the event’s original goals.

“Verizon Media’s Build It event was one of the first we’ve worked on to pivot from physical to digital in three short weeks,” says Steve Alexander, MVRK founder and chief experiential officer.

According to Galloway, Verizon Media wanted to offer something that had the same feeling of the originally scheduled event. “We wanted to create something fun that incorporated elements like the interactive game MVRK had originally created to take place on the lawn,” says Galloway.

As part of that original concept, new brands and services would be shared via a physical game board that incorporated keynote speakers, sizzle reels, product demos and information plus competitions with prizes for attendees. Moving that to a digital experience — now branded as Build It: WFH (Work From Home) — meant creating a similar concept that employees could participate in through their screens.

One of the biggest challenges was determining how to incorporate the scheduled speakers. Verizon Media created a production kit that they sent to the speakers and taught them how to produce their own videos. “That was probably the most difficult aspect from an event production standpoint,” said Galloway, “but it turned out incredible, and now we have the production kits and new capabilities on our team to better enable us to work in a virtual environment.”

They also had to take into account the fact they were now trying to reach employees located in more than 20 different time zones. To address this challenge, the event kicked off as scheduled on April 2 with a live keynote from CEO Guru Gowrappan but employees were given five days to log in and compete in the game.

Going into the event, the Verizon Media event team was optimistic about the reaction. “With everyone working from home, we thought creating the game would foster positive employee engagement,” says Galloway.

What they found was that engagement was even higher than they anticipated. More than 3,500 employees joined in on the launch day itself, with more than 5,600 employees from 14 different city-based offices in North America, Asia, Europe, Africa and the Middle East participating overall. “That’s an incredible turnout, especially under the circumstances,” says Galloway.

Looking ahead, Galloway reports that Verizon Media will probably stick to virtual events for the rest of this year, but in the future would look to create a hybrid event where both on-site attendees and those participating digitally share a unified experience.

“There are no limits to what we’re able to achieve today in digital due to the technologies we have, from 3D to VR to gamification,” says Alexander. “[They] are able to truly transform experiences and connect people from all over the globe.”