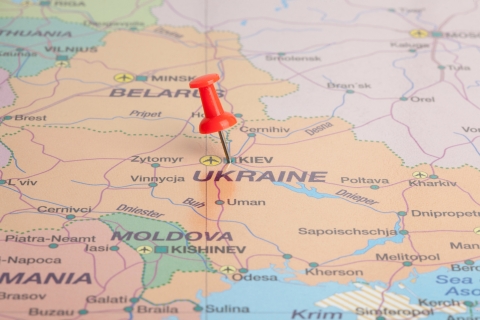 A growing number of events industry organizations are condemning the acts of aggression on Ukraine, with some suspending business activities with Russia.

IMEX Group, Messe Frankfurt, Messe Düsseldorf, Professional Convention Management Association (PCMA), Meeting Professionals International (MPI) and Events Industry Council (EIC) are among the entities that have issued statements on the conflict showing support for the people of Ukraine and denouncing the Russian invasion.

IMEX Group suspended Russian businesses from attending its IMEX Frankfurt show, which is scheduled for May 31-June 2.

“Sadly, we have taken the decision to suspend Russian state enterprises from participating at IMEX Frankfurt 2022 as a direct result of the current political situation,” said IMEX Group CEO Carina Bauer and Chairman Ray Bloom in a statement. “We do this with a heavy heart, understanding that the world is in an unprecedented situation. Our hearts go out to everyone who is affected and especially the people of Ukraine. All of us wish for a speedy and peaceful resolution to this conflict.”

IMEX Frankfurt is one of the world’s largest trade shows for the meetings, incentives, conferences and exhibitions industry. More than 5,100 hosted buyers attend the show to meet more than 3,000 exhibitors from 170 countries.

Messe Frankfurt, host venue of the IMEX show, also released a statement, which called for peace and included its decision to suspend events of its subsidiary Messe Frankfurt RUS until further notice.

“Messe Frankfurt is looking with great concern at the tragic developments in Ukraine these days,” the statement said. “Our company creates internationally neutral communications and trade platforms where people of all nations come together. Our corporate principles stand for peaceful coexistence and trade relations of the same kind—because this is a prerequisite for a functioning international economy and for a functioning international coexistence as a whole.”

Meanwhile, the Supervisory Board of Messe Düsseldorf suspended the group's business activities in Russia until further notice as a consequence of what it referred to as “the disturbing events in Ukraine” in a statement. This also includes the activities of the subsidiary Messe Düsseldorf Moscow.

“The entire city of Düsseldorf is thinking of the people in Ukraine,” said Dr. Stephan Keller, mayor of Düsseldorf and chairman of the Supervisory Board of Messe Düsseldorf in the statement. “After we have already put the city partnership between Moscow and Düsseldorf on ice, it is only logical that Messe Düsseldorf, as a subsidiary of the city, also suspends its activities in Russia for the time being.”

Wolfram N. Diener, CEO and president of Messe Düsseldorf, added, “The current events contradict the mission and values of our company, which is to create international marketplaces for free, cross-border intercultural and economic exchange.”

PCMA condemned the unprovoked and unjustified attacks on the people of Ukraine and called for the world to come together, stand united against war and acts of evil against innocent civilians and be resolute in driving economic good to solve complex issues.

“Social injustice—war—has no place, anywhere,” the statement said. “We support UN Secretary-General Antonio Guterres’ position in his call to end this senseless war. “I must say, President Putin: In the name of humanity bring your troops back to Russia. In the name of humanity, do not allow to start in Europe what could be the worst war since the beginning of the century, with consequences not only devastating for Ukraine, not only tragic for the Russian Federation, [but for the entire world].”

PCMA said it is committed to contributing to the Ukraine Humanitarian Fund to support the urgent need for food, water and shelter.

MPI condemned the acts of aggression from Russian forces, urged an expeditious end to the conflict with Ukraine and, in a show of support for the people of Ukraine, suspended business with all companies in Russia and paused any plans to formalize an MPI chapter in Russia.

“MPI is disheartened that an action like this is necessary, yet understands it is critical to ensure these violent acts are met with responsible action to help lead towards a peaceful resolution,” the statement said. “We remain concerned for the well-being of our community and our MPI members in Russia and Ukraine who were already seeking to climb out of the shadow of this pandemic and are now experiencing these unprecedented challenges.”

EIC strongly denounced the war in Ukraine and condemned the clear violation of international law.

“We are deeply disturbed by the humanitarian crisis unfolding, which will ultimately impact other countries and regions across Europe and are concerned for the safety and well-being of the people of Ukraine,” the statement said. “The military invasion of Ukraine is in direct conflict with the values that all of us who serve the Events Industry Council and our global community passionately believe in, and we strongly oppose any form of violence and oppression that negatively impacts the safety and security of those that work in the events industry across Ukraine, their families, colleagues and indeed all Ukrainians.”

EIC further emphasized its firm stance with Ukraine and urged all parties to work toward a peaceful resolution.

“All of us at the Events Industry Council and our global EIC family have been deeply moved by the bravery, courage and resolve of the Ukrainian people and the incredible show of support from our own community and across the world,” the statement said.