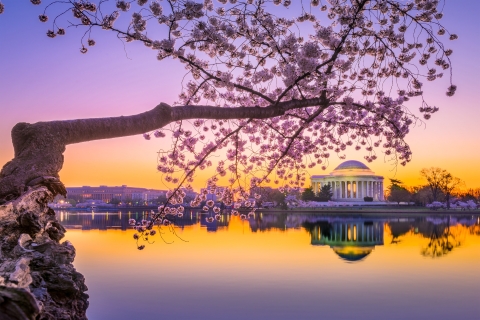 As the vibrant annual National Cherry Blossom Festival comes to a close this month, Washington, D.C., continues to bloom with a prosperous business events scene—expected to thrive throughout 2022—and a wealth of new developments.

The nation's capital is well on the road to recovery as the industry moves out of the pandemic, and it has a positive outlook for the full return of meetings, conventions and trade shows, according to Elliott Ferguson, president and CEO of Destination DC (DDC).

“In a good year, we host north of 20 city-wide conventions,” Ferguson said. “Last year, we had four, and this year we have 20 on the books with more than 390,000 room nights—a big step in the right direction.”

He added, “Spring is really the beginning of our major convention season, and I remain optimistic about recovery and the positive economic impact and local jobs that come with meetings and events,” Ferguson said.

Over the past year, DDC has reinforced its “Connected” positioning, an umbrella marketing strategy that is centered on what sets the capital apart and the assets that make meetings and events successful. The campaign includes “Connected Capital,” highlighting the city’s rich intellectual capital, “Connected Campus,” focusing on the use of non-traditional spaces that expand the footprint of the Walter E. Washington Convention Center, and “Connected Community,” inviting event professionals to leave a legacy in the city by driving social change through connections to certain communities.

A staple of the campaign is the city’s intellectual capital and thriving industries that help attract conferences and events, including technology, biotech, medical, education, sustainability, transportation and government advocacy.

“Clearly, we have so many different sectors of industry in our own backyard, so we’ve become a hub of innovation, ideas and thought leadership, and conventions and conferences have access to resources that are unique to our destination,” Ferguson said.

Meanwhile, the destination’s major focus on sustainability is another key selling point for event professionals, according to Ferguson.

“We were the first LEED Platinum City in the world, and efforts under the Clean Energy Act DC aim to move us to 100% renewable electricity by 2032, which is a big deal for groups that are really focusing on sustainability,” he said, pointing to the destination’s growing list of green spaces and eco-friendly venues and hotels.

Washington, D.C., was in expansion mode before the pandemic, and the momentum has not waned, with several new offerings unveiled in 2021 and many others set to debut this year and beyond.

“New hotels, museums, parks, monuments and other developments have popped up over the last three years, so there’s a lot for attendees to explore while they are in Washington and a lot more to come,” Ferguson said, pointing to $10.3 billion in development under way in the city that will not only augment its product line, but improve accessibility.

Following are some of the major initiatives: