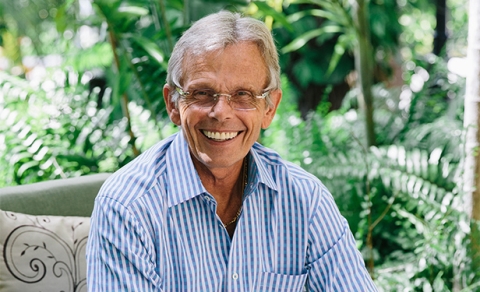 The late President George H.W. Bush famously detested broccoli. But you know what he liked? “Oak grilled duck breast with lychee sauce,” said Bill Hansen, caterer to the stars in South Beach, Florida. “It was on a buffet and he asked if could have some more. Of course, we brought more over. He loved it.”

That’s just a taste of the stories Hansen can cook up when detailing his experiences managing his catering company for 40 years. He’s managed the kitchen for golfing greats at the Masters (16 ordered milkshakes, part of Tiger Woods’ requested menu), hosted four U.S. presidents (Reagan, both Bushes and Obama) and Pope John Paul II, a thrill for the devoutly religious Hansen even though he was not blessed by his Holiness (an oversight, surely).

But the most star-struck Hansen has ever been was catering P. Diddy’s New Year’s Eve party, a request that came in the day before. Beyonce, Jay-Z and Dennis Rodman are just a few of the guests Hansen can recall. “That was the most celebrity-packed party,” he said. “It was a real treat.”

Ready for a Return

Miami’s corporate events scene would not be the same without Hansen. He is an ambassador for the collocated Catersource + The Special Event, to be held at Miami Beach Convention Center this July. It will be a far cry from when Hansen first attended Catersource in New York City years ago. “There were 10 of us there,” he laughed.

Despite the pandemic, he expects more than that this year as Informa, which operates the dual show, is planning for a face-to-face production. “It’s going to be very interesting to see how many people attend in-person,” Hansen said.

It goes without saying that corporate business has been slow since COVID-19 struck the United States. Hansen said his business has relied upon the resurgent wedding industry. Catersource + The Special Event is a “positive note,” he said, as is a luxury car company enlisting his aid for a private dinner.

He, like the rest of us, is waiting for vaccine distribution to reach a level that breaks the lock on large gatherings. “Once people are vaccinated, which hopefully is sooner rather than later, people are going to be more amenable to travel,” he said. “My prediction is the fourth quarter.”

Hansen’s corporate business comes primarily through destination management companies. Both are reliant on out-of-town travel, and as such, have been hit extremely hard by lockdowns and restrictions. He has nothing but praise for Florida Gov. Ron DeSantis for a relatively open-door policy during the pandemic. “People are still getting out and about, and because of that we’re surviving economically,” Hansen said.

Survival is the name of the game now. “Cash is king” became Hansen’s mantra early on in the pandemic. The point was to secure clients and business, even if it means coming at a discount. Some money is better than nothing.

Among the advantages Hansen enjoys is his experience, which has allowed him to build connections and capital. For his next venture, he is relying on both.

Billhansen.com launched recently to enhance the catering giant’s influence on Miami events. He sees his role via the online platform as a resource to connect vendors with DMCs and planners, without taking away business from those partners. “I’ve lived here 45 years and I’ve been in business for 40 years; I know who does a good job and who doesn’t do a good job,” he explained. The idea is he will recommend service providers, from cigar rollers up to deejays, for the partners to hire.

Ultimately, Hansen wants to go national with his reference system. But that’s a long-term plan. For now, he is building this new business from the ground up—pouring resources into social media advertising and YouTube projects.

“If you’re not growing, you’re dying,” he said.

Never fear, the catering business will live on, Hansen assured. “The staff operates it quite well,” he said. “I always joke that I am the eye candy.”