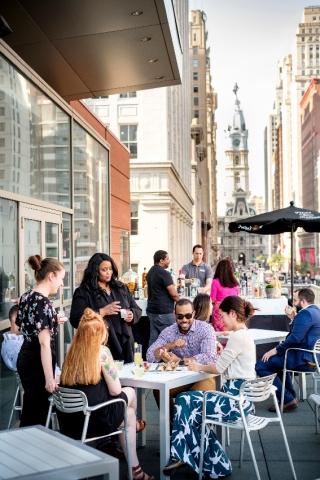 The city is known for having one of the top restaurant communities in the U.S. In 2019, Israeli small-plate-driven Zahav took the James Beard Award for outstanding restaurant. And Cadence, an upscale American prix fixe BYO eatery, was named best new restaurant by Food & Wine magazine.

“Philadelphia has been a captivating destination for meetings, conventions and events for years,” says Kavin Schieferdecker, senior vice president of the Philadelphia Convention & Visitors Bureau, “And our ability to offer countless dining options for groups is one of the factors driving that demand.”

Philadelphia is known for cross-pollinating flavors, styles and cultures. “Every neighborhood adds a different taste to our repertoire – from East Passyunk to Fishtown,” says Schieferdecker.

And as those neighborhoods continue to change, new areas are gaining culinary credibility. The bustling corridor of Fishtown, easily accessible by train, has produced a handful of popular new spots.

Many of Philadelphia’s star chefs are branching out from their flagship restaurants to launch fast-casual joints. These hotspots allow diners to easily access dishes from celebrity chefs without the need for a reservation or formal dining experience.

Chef Michael Solomonov (of Zahav fame)’s Goldie specializes in falafel, and Dizengoff — now in three locations within Philadelphia along with Goldie — offers three kinds of hummus along with frozen labneh (a soft cheese made from strained yogurt).

Federal Donuts is a hot spot for fried chicken and doughnuts, offering a variety of unusual flavors for both. And James Beard Award winner Greg Vernick just launched Vernick Coffee Bar, a modern coffee bar and 40-seat café featuring seasonal menus, in the lobby of the new Comcast Technology Center.

Philadelphia has a popular brewery scene. Schieferdecker says that the CVB partners with companies like Yards Brewing, offering tasting tours and private dining experiences within the brewery’s bustling manufacturing facility.

The city and surrounding area is also home to a number of craft distilleries. In fact, the city even has a “distillery trail.” Rowhouse Spirits in Kensington offers a range of spirits, including a gin that anyone who enjoys Hendrick’s should try — and sports one of the city's hundreds of murals.

"Public art is a priority in Philadelphia, and Mural Arts has been an expression of our city since 1984," Schieferdecker says. "Each of the city’s more than 4,000 murals are community-first initiatives that catalog Philadelphia’s past, present and future. It’s the same spirit that inspires our restaurant scene."

While brewery and distillery visits may not be right for every group, serving local brews and spirits at catered events allows planners to showcase even more local flavors.