Desert Southwest Hotels and Resorts Enhance Their Offerings for Groups 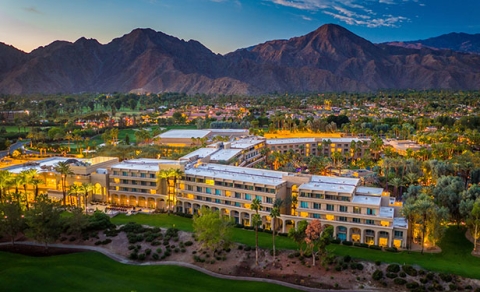 With winter approaching, the appeal of holding meetings in the Desert Southwest only increases — especially for groups wanting to take advantage of the area’s abundant sunshine to host outdoor gatherings. Even better for event planners, a number of hotels and resorts in the desert region that runs from Southern California to Arizona to New Mexico have recently completed major renovations or in other ways added to their offerings for groups.

With the recent opening of a new water park featuring dueling 30-foot-tall water slides and a lazy river, the 530-room Hyatt Regency Indian Wells Resort & Spa (right) has completed its $21 million renovation project. As part of the project, the Indian Wells Conference Center, a stand-alone facility with 27,000 square feet of indoor function space and two outdoor terraces (part of a total 88,000 sq. ft. of indoor-outdoor event space), was refurbished. Also renovated were the resort’s Penthouse Suites and 23 of the 43 guest villas, all of which come with outdoor courtyards that can be used for small events. New food and beverage offerings include a relaunch of the resort’s signature restaurant, Lantana, and the brand new Citrus Marketplace and Cafe in the lobby.

Located in downtown Phoenix just steps away from the Phoenix Convention Center, the Hyatt Regency Phoenix has reopened following a floor-to-ceiling renovation that included a revitalization of the hotel’s 693 guest rooms and 50,000 sq. ft. of meeting space. As part of the project, the hotel also opened a new market and a restaurant called Bushel & Barrel.

Adjacent to the convention center in downtown Phoenix, the 1,003-room Sheraton Downtown Phoenix is in the midst of an extensive renovation that will transform the hotel into the new prototype for Marriott’s portfolio-wide rebranding of Sheraton. The hotel is scheduled to reopen to the public in January 2021 with newly renovated guest rooms. The lobby, restaurant and other areas —  including the hotel’s 110,000 sq. ft. of meeting space — are projected to be completed by the second quarter of 2021.

Also scheduled to reopen in January 2021 following extensive renovations is the Sheraton Grand at Wild Horse Pass, located 11 miles from Sky Harbor International Airport on the Gila River Indian Reservation. The 500-room hotel features culturally themed guest rooms and Aji Spa, both of which reflect the traditions of the Pima-Maricopa tribe, which owns the resort.

The Eldorado Hotel & Spa in Santa Fe recently unveiled a new rooftop pool that includes a bar, event space and views of Santa Fe’s historic Plaza. As part of the addition, Eldorado also added new poolside patio guest rooms with direct access to the pool deck. The 219-room hotel offers a variety of meeting space that includes ballrooms, boardrooms and outdoor terraces — plus unique venues such as the historic Casa Espana building and a non-denominational chapel.

Santa Fe’s 136-room Inn & Spa at Loretto has added to the amenities available for groups meeting in its 12,000 sq. ft. of meeting space with the opening of a new cafe, e-bike rental and salon. The Crafted Cafe showcases local winemakers and distilleries along with breakfast, lunch and light bites. At the Heritage Inspirations shop, planners can book rentals or organize tours and excursions on their all-new fleet of electric bikes. After the bike ride, the new Salon at Loretto features a variety of hair and nail services to go with the hotel’s award-winning spa.