5 Hot Event Spaces to Host an Intimate Meeting in Miami 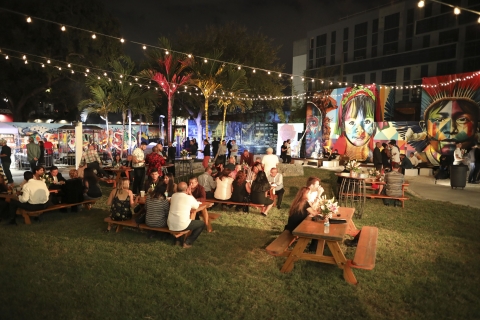 Fresh off a massive $620 million renovation completed in 2018, the LEED-certified Miami Beach Convention Center is an incredible place for large groups to convene in The Magic City. Yet if you’re a smaller corporate group, the 1.4-million-square-foot space might just swallow you up whole — or at least feel a bit overwhelming.

Following a recent trip to the sunny destination, we’ve rounded up some our favorite, more intimate venues for meeting in Miami.

For a Downtown Feel

If your group loves being in the middle of the action (or you’re in the financial industry and want to be centrally located to Brickell, the city’s financial center), W Miami is the place to meet. You won’t find better views of the city than those from the two glass-enclosed boardrooms on the 15th floor, located just off the popular restaurant and indoor-outdoor lounge space Addikt, which opened last summer.

Each boardroom can hold up to 10 people and is relatively sound-proof for meetings, despite being adjacent to one of the hottest gathering spots in the neighborhood.

When we visited, a chef/bartender team set up incredible DIY cocktail stations, where all the ingredients for cocktails like the Concrete Jungle — Malibu, Bacardi, basil, pineapple and coconut — were pre-measured for us to shake up our own libations. Ask them about something similar for your own group (after the meetings are wrapped for the day, of course).

The food and drink at Addikt is also outstanding, particularly the hickory-smoked croquettes served in individual smokers. If you’re doing a weekend site visit, stop in for their new brunch, complete with carrot cake pancakes.

Anyone familiar with Miami’s famous Art Basel will recognize Wynwood Walls, (pictured in the introductory image for this story) essentially a community art project that’s transformed the Wynwood neighborhood over the last decade. Started in 2009 by the late community Tony Goldman and now run by his daughter, Jessica Goldman Srebnick, Wynwood Walls brings together some of the world’s greatest mural artists — and is breathing new life into the area.

Since it began, the program has worked with more than 50 artists and covered more than 80,000 square feet of walls. Event planners can capture a slice of that creativity by hosting an indoor or outdoor event among the gardens and galleries, from long-table dinners against a wall by Brazilian street artist Eduardo Kobra to colorful cocktail hours inside the eclectic gallery of Neo-Pop artist Peter Tunney (who may even make a surprise appearance at your fete, as he’s often on-site). The best part? Built-in Instagram ops around every corner, so you don’t have to create your own. Long known as a party city, Miami is slowly turning into a cultural destination. Nowhere is that more evident than the area of downtown known as Museum Park, which is bordered by American Airlines Arena, Bayside Marketplace, Perez Art Museum Miami and the Phillip and Patricia Frost Museum of Science.

Relocated from its former quiet home in Coconut Grove about two years ago, the latter — known as Frost Science for short — is a one-of-a-kind, open-air concrete jungle with fascinating exhibits on sea life, birds and more across multiple levels. The museum has multiple spaces that can be booked for events, including a 250-seat planetarium or a 5,000-person buyout option, but one of the most intriguing lies beneath the 31-foot oculus lens of the aquarium.

A second unique space, Baptist Health South Florida Gallery, is connected to the oculus via a grand wrap-around staircase. Its neatest feature is an interactive LED dance floor, with 4,000 lights that can be programmed to screen your presentation or branded material. Or, you may find it even more fun to just play some music and let your attendees groove.

For a Taste of Miami 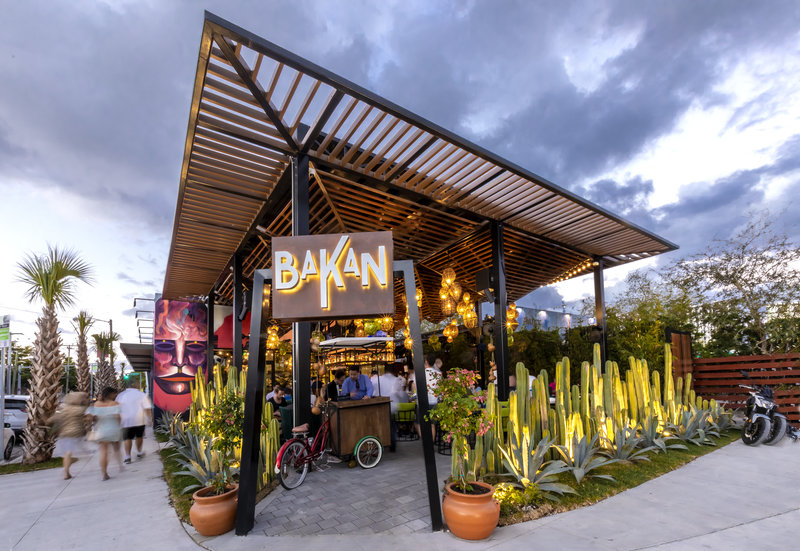 Just down the street from Wynwood Walls, the trendiest new restaurant in the Wynwood neighborhood is Bakan, opened early this winter. While it’s tough to make it past the open-air seating area outdoors — a vibrant atmosphere with magical lanterns, uplit cacti and upbeat music that’s not overwhelming — the interior space of Bakan is just as inviting, with its verdant subway tile and wall of unusual tequilas. (Also check out the bathrooms, which are painted hot pink, just for fun!)

The environment alone is worth booking a dinner or cocktail event here, yet the Mexican food lives up to high expectations, too. Homemade blue-corn tortillas steal the show, so ensure there are lots of them on your menu — to dip in guacamole, cradle queso fundido or serve as a vessel for eating as much carnitas as possible (though there are plenty of fresh veggie-focused dishes, too). And don’t forget the cocktails: Bakan has one of the largest selections of mezcals and tequilas in the city.

A restaurant buyout can accommodate up to 170 guests for a seated dinner or 220 for a cocktail reception.

If your meeting in Miami is all about getting down to business, without the distraction of the city’s nightlife scene, the 490-room Ritz-Carlton Key Biscayne is a perfect location (although, you’ll have to contend with the beautiful beaches).

Set on a secluded barrier island that feels far from downtown — though it’s only a quick drive across the Rickenbacker Causeway — this luxury destination has everything you’d expect from the Ritz-Carlton brand, plus many little details that give the hotel a sense of place.

For example, a giant vase in the lobby is filled with 490 brilliantly colored roses, one for every guest room; a lovely coffee shop serves locally roasted Panther Coffee and can pack to-go picnic lunches for groups heading to the beach; and the on-site Lightkeepers restaurant is named for the Cape Florida Lighthouse (we especially love its large, round tables with lazy susans in the middle, which are perfect for groups).

The resort this year completed a renovation to its 25,000 sq. ft. of indoor event space, and also has 35,000 sq. ft. of outdoor space available for events, including the stunning Great Lawn with its spectacular ocean views.