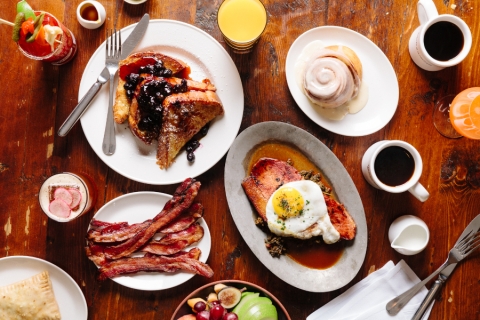 When it comes to planning group dinners or receptions, hotel restaurants used to be the fall-back option: convenient but not exciting. But in Portland, Ore. the tables have been turned. Some of the finest restaurants in the city — and in the Pacific Northwest — are located inside Portland’s downtown hotels.

This is good news for every planner who dreads finding a hot restaurant for private dining, and also for attendees who are tired at the end of their event day and would rather not deal with taxis, Ubers or Lyfts.

Marcus Hibdon, director of public relations and communications for Travel Portland, says that the proliferation of new hotels is the driving force behind Portland’s culinary scene, giving chefs new opportunities. But those opportunities are powered by the fine local ingredients available paired with the city’s culture of creativity.

“Nobody's playing it safe,” Hibdon says. “That's not part of Portland's fabric. We like to take risks. We like people to try stuff they've never had before. We like to pay homage to the culinary inspirations —the different ethnicities and countries in the world where the food originated.”

There are now a wide variety of culinary options to choose from, able to meet every cuisine and budget range that your group may have. We’ve compiled a list of nine Portland in-hotel restaurants that provide private dining options, for groups ranging from intimate executive gatherings up to large dinners and receptions.

Jackrabbit at The Duniway, a Hilton Hotel

The tavern is perched on the hotel’s roof, with a patio with windbreaks, heaters and firepits that can hold 103 people. Helmed by Portland chef and restaurateur David Machado, Altabira offers modern updates on classic dishes. Five private dining rooms feature floor-to-ceiling windows with views of Portland’s downtown skyline. Pullman Wine Bar & Merchant, on the ground floor of the Eastlund, also has a private room styled like a wine cave that can hold up to 24. 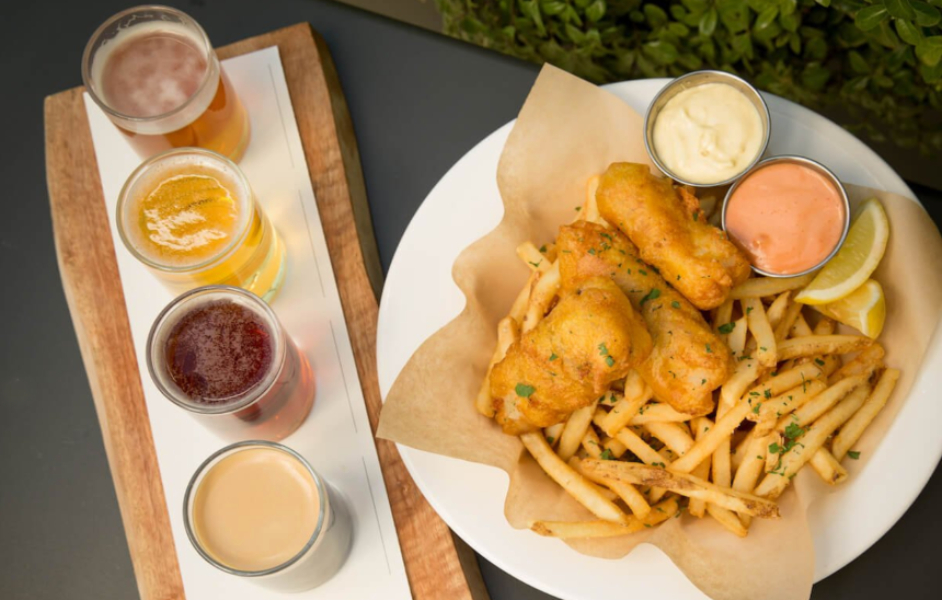 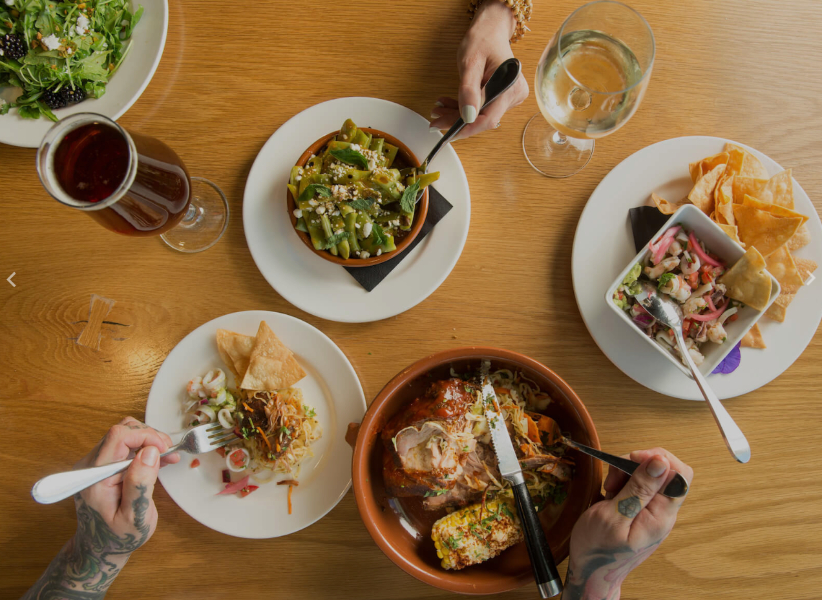 Machado also owns Nel Centro, which serves cuisine based on cooking traditions of Northern Italy and Southeast France. The restaurant can hold up to 125 guests.

Located in historic Hotel Lucia, Imperial has a private dining space that Hibdon says is perfect for executive dinners. Chef Vitaly Paley, one of Portland’s original farm-to-table chefs, uses local ingredients and a custom-made wood-fired grill to offer his take on classic American comfort food like fried chicken. All beers and wines are local, and spirits from local distilleries are featured in the cocktail menu. Hotel Lucia can offer private dining in Imperial and its other restaurant, The Crown, as well as within three event rooms to accommodate groups of up to 200. The hotel also has a Craft Beer happy hour — every evening from 5:30 – 6:30 p.m., guests can sample a pint or two of rotating local craft brews on tap. 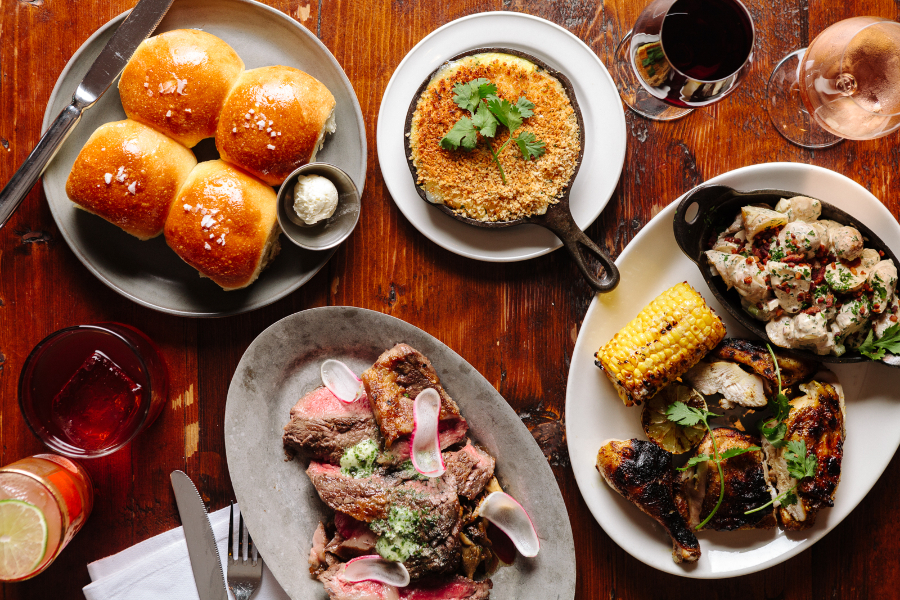 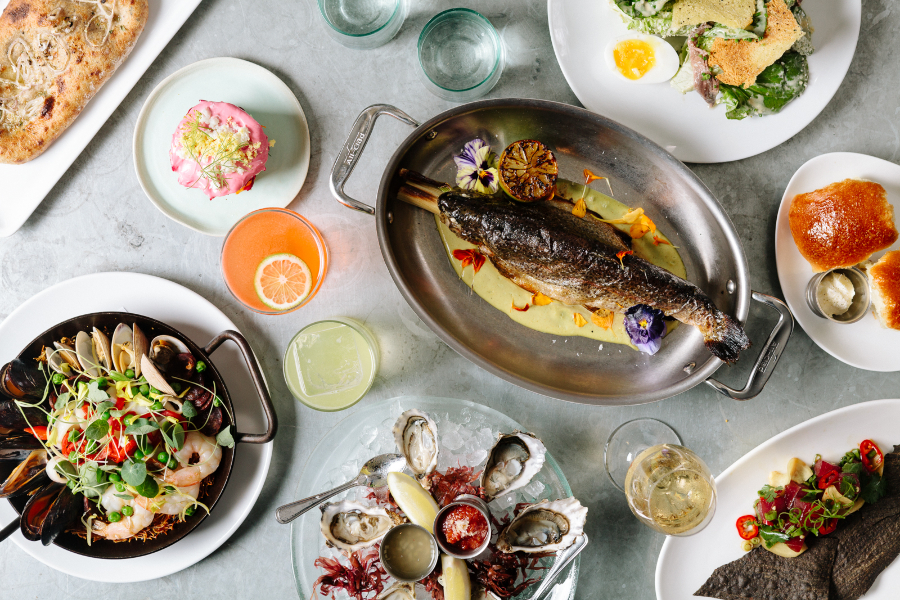 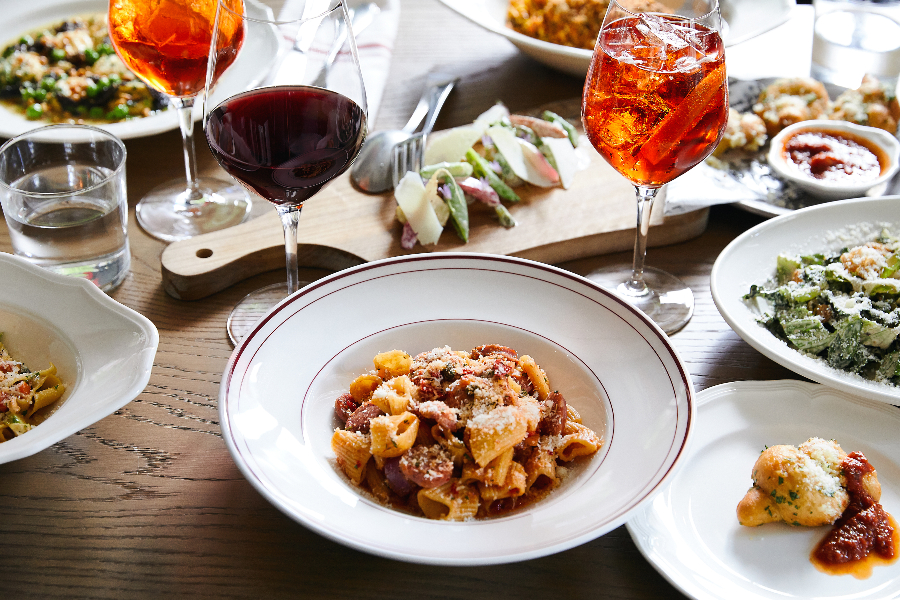 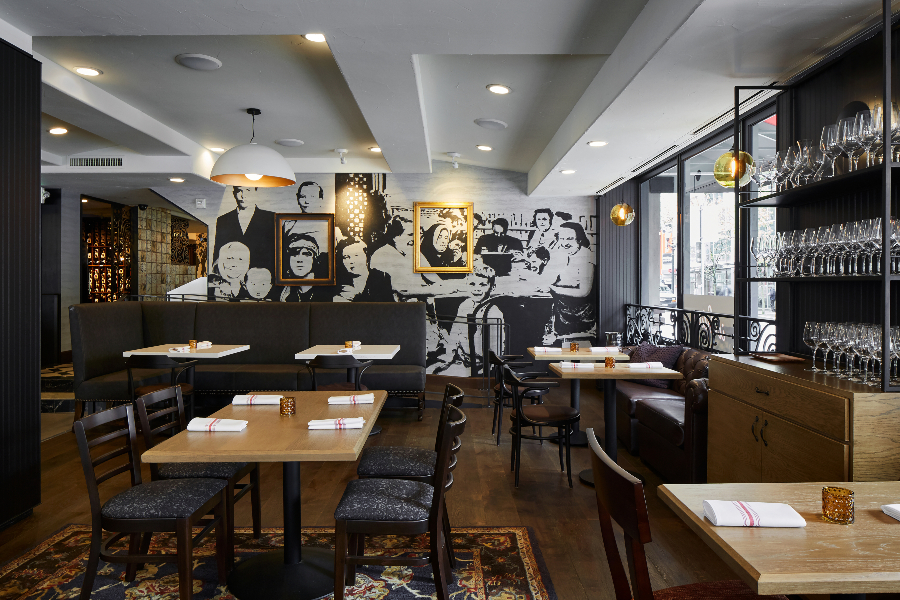 Departure Restaurant & Lounge at The Nines

Two-time James Beard Award semifinalist and Top Chef runner-up Chef Gregory Gourdet is the culinary mastermind behind Departure, arguably one of the first “hot” in-hotel restaurants in the area. Serving a range of modern Asian cuisine featuring Portland’s local ingredients and a cocktail bar that Hibdon calls “amazing,” the restaurant is located atop the hotel. Private space is available, and the restaurant also has private booths.

The 70-seat Bullard is named after Top Chef alumnus Doug Adams’ hometown, and the menu draws from his upbringing in Texas. Diners can expect a meat-heavy menu with carefully selected cuts of local beef, pork and lamb. A semi-private space within Bullard’s main dining room that seats 12 is available for bookings. The restaurant can also cater for Woodlark’s five private event spaces, including the hotel’s Abigail Hall. 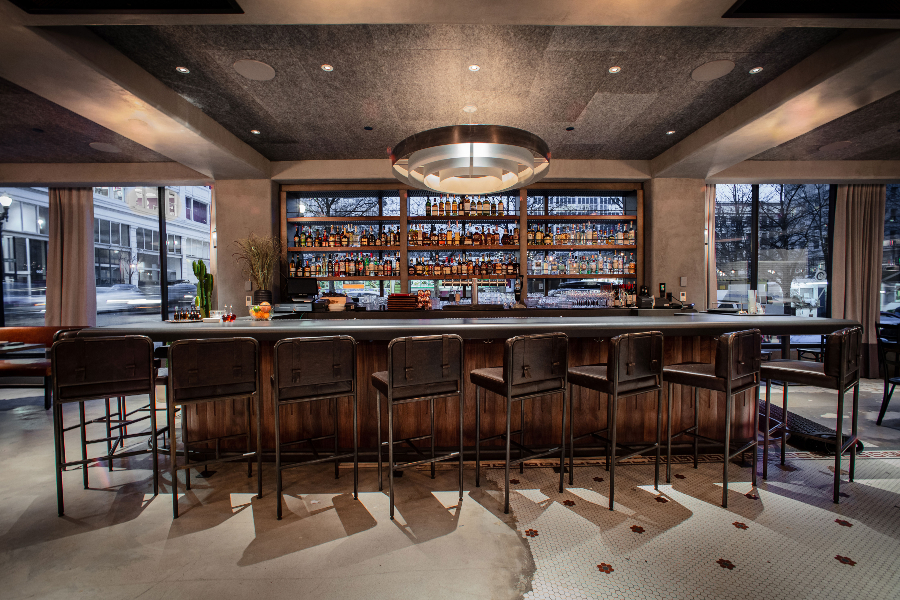 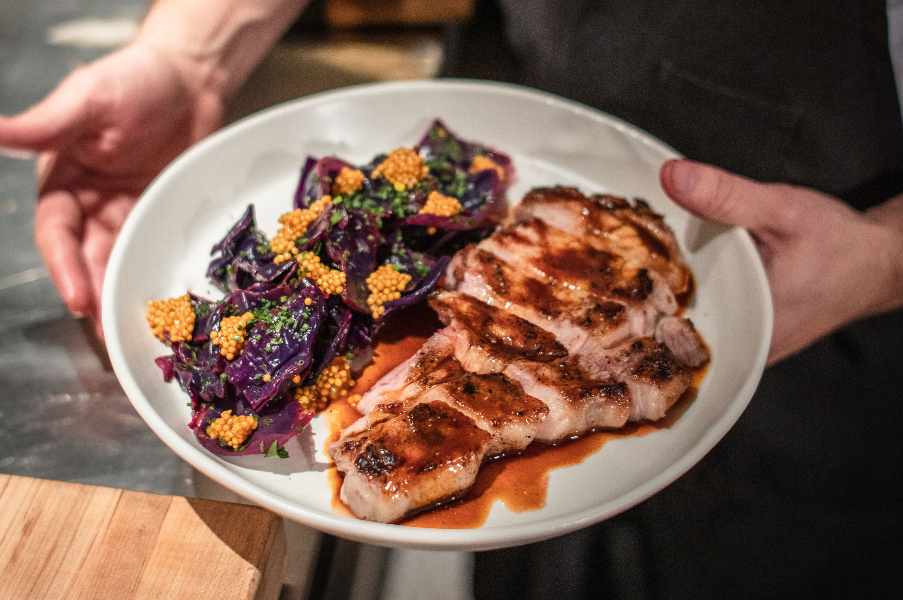 Tope at The Hoxton Portland offers an abundance of indoor greenery and Portland cityscape views. The rooftop taqueria/bar offers dishes inspired by Mexican street food and a list of mezcal cocktails as suggested pairings. Buyouts are available – no reservations are accepted otherwise. 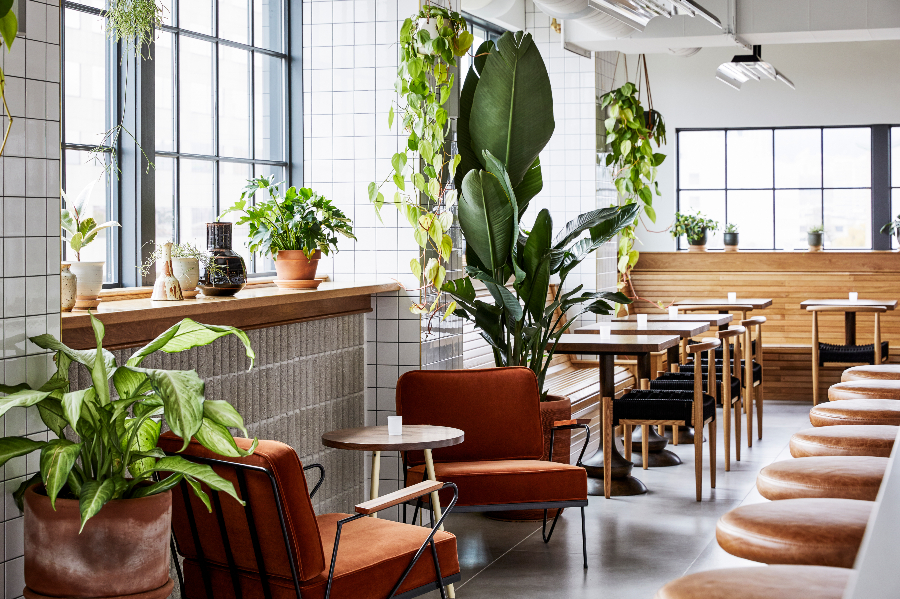 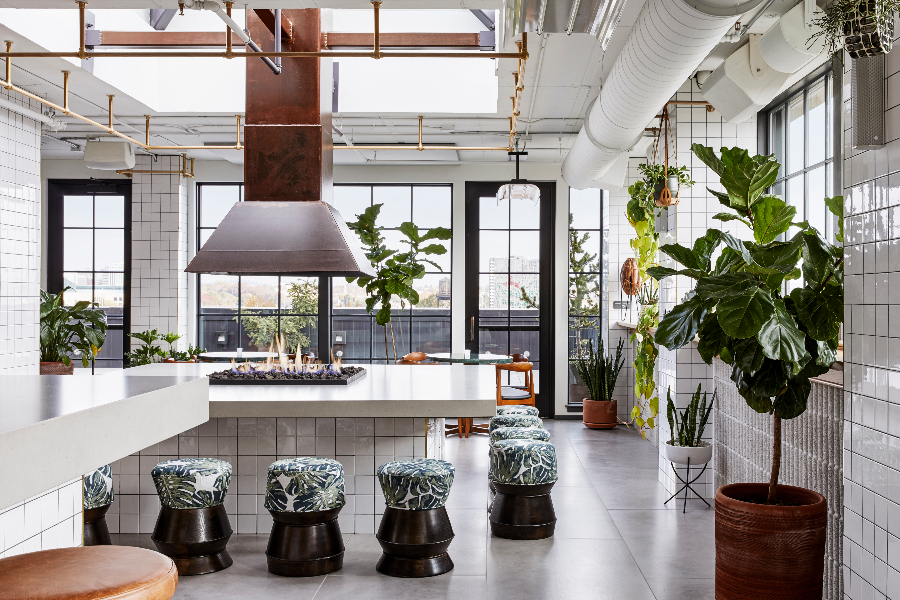 Tope photos courtesy of The Hoxton

Hibdon fully expects the hip hotel restaurant trend in the city to continue. “You can't really open a new hotel in Portland without making sure your culinary program is top notch,” he says.

In addition, Portland’s hotel development is continuing to boom. With nine properties scheduled to open between 2020 and 2023, we’re sure to see more innovative hotel restaurants appear right alongside them.

For help finding hotels and venues to host your Portland event, go here.