How Three Certified Convention Centers Are Enjoying Their Green Status 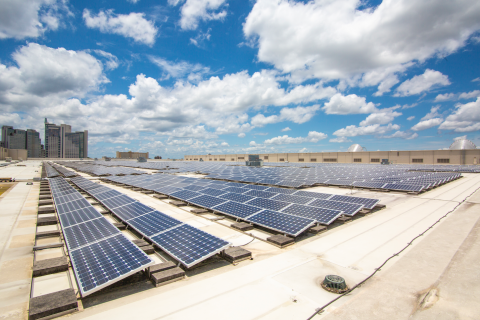 Leadership in Energy and Environmental Design, or LEED, is the most widely used green building rating system in the world. Administered by the U.S. Green Building Council, the certification requires a four-step process: registration; a comprehensive certification application; review with Green Business Certification Inc.; and finally, if all checks out, certification (followed by celebration).

“Event planners are actively looking for venues that have earned LEED certification as part of their overall event sustainability plan,” says Kim Heavner, vice president of conferences and events at USGBC.

She continued, “Sustainability is becoming the norm for large-scale events, whether they are held at convention centers, sports stadiums or hotels, and as we see the steady rise of LEED certifications of these types of buildings, we’re seeing similar spaces following suit — and it’s becoming much easier for planners to find sustainable venues that fit their needs.”

We checked in with a few of the convention centers that have achieved LEED status in the past two years to see how they’re doing, and how their investment in certification has paid off.

“When choosing where their events will be held, it is increasingly important for planners to see the variety of sustainability practices already in place at our venue and the willingness of our team to collaborate with our clients to make their green goals attainable,” says Ryan Thorpe, assistant general manager of GCCC. “For example, our South Café & Marketplace merchants making the transition to compostable serviceware demonstrates our venue’s commitment to responsible environmental stewardship while inviting our guest population to participate right along with us."

This Spectra-managed convention center achieved LEED Gold certification in February. Getting certified not only demonstrated the city’s commitment to sustainability, but has also proved to be good for business.

“Achieving LEED certification is a market differentiator that will position the ACCC in a leading group of venues across the country that value sustainability and its positive impact on the visitor experience, environment and financial returns,” said Jim Wood, president and CEO for Meet AC, in a press release. “The certification will be an important talking point when vying for new business at the convention center.”

After only a few months in, they’re already looking ahead to what’s next in the sustainability realm.

“Our next focus is within our food and beverage division: exploring ways to reduce food waste generated at the facility through operational efficiencies, working with local partners to donate unused food and working with local farmers to collect food scraps,” says Jason Resetar, assistant general manager at ACCC.

OCCC in Orlando first earned LEED Gold certification in October 2013, and was recertified in August 2018. With 2.9 million gross square feet, it is the largest convention center in North America to do this, according to OCCC officials. It was also the first convention center in the U.S. to have its environmental management system ISO certified, and the third to receive the APEX/ASTM certification.

“Considering the extraordinary importance to Orange County's economy of attracting meetings and conventions from around the world, achieving LEED for Existing Buildings Gold certified status for our convention center remains one of the most important investments in our future,” says Jessie J. Allen, interim executive director for OCCC.

Corporate responsibility is also a huge component of OCCC, especially for large shows. For example, the International Dairy Deli Bakery Association recently collected 176,315 pounds of food, the equivalent of 18 truckloads, which was donated to a food bank in Central Florida.

A growing number of corporations place sustainability high on their priority list when looking for event venues. We'd love to know how important LEED certification is to your organization — do you actively look for it, and/or does it factor into your decision-making process? Let us know in the comments section below.