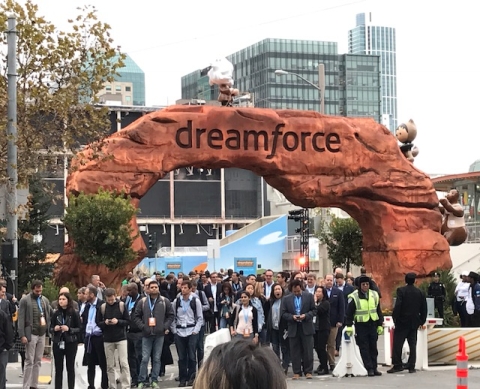 Innovation. Inspiration. Diversity. Inclusion. Equality. Giving Back. Those were some of the pervasive themes at Dreamforce, Salesforce’s annual user conference, held Nov. 6-9 at the Moscone Center in San Francisco.

Now in its 15th year, Dreamforce has grown to become the largest software conference in the world, with more than 120,000 registered attendees from around the globe. This year’s conference agenda featured 2,700+ sessions designed for a wide range of roles and industries, including sales, marketing, customer service, financial, retail and healthcare. Fifteen million people watched sessions online, either live or on-demand.

What impressed me the most about the conference was the dedication and passion of everyone who participated. From the keynote speakers, to the exhibitors, to the attendees, everyone was clearly excited to be a part of this event.

Around the event, the word “Ohana” was used often. In Hawaiian culture, Ohana describes family and family ties. Families look out for each other and help each other. In the late 90s, Salesforce CEO Marc Benioff spent some time in Hawaii and embraced the concept. Salesforce was built on the belief that its entire ecosystem should follow this model of inclusion and support.

From “we welcome all gender identities” signs outside the Moscone Center restrooms, to extensive opportunities for charitable fund-raising and donations, the message of Ohana was clear.

The theme of Dreamforce was Trailblazing, with the message that “we are all trailblazers” communicating that everyone has the power to be a Trailblazer and make the world a better place.

The conference is known for its keynotes and this year did not disappoint. Speakers included Ashton Kutcher, former First Lady Michelle Obama, Taraji P. Henson and of course, Benioff himself, who emphasized using education and technology as forces to help effect positive change.

Dreamforce also featured an Equality Summit, with a keynote on Art, Activism and Impact.

The Customer Success Expo floor featured a diverse array of companies. I stopped by the Girl Scouts booth to learn more about their STEM trailblazing and get the scoop on when and where they’d be selling cookies. G2 Crowd was soliciting independent unbiased software product reviews for a host of suppliers in exchange for a $10 donation toward building homes in Haiti, along with a $5 Starbucks gift card for the attendee – an idea I think borders on genius.

I also had the chance to try out the new Prezi Next, a fun tool that allows users to create dynamic, engaging presentations (perhaps for that next event overview executive review).

Yet another way that Dreamforce excelled at making fundraising fun and easy was gamification. There were Dreamforce Quest kiosks throughout all the Moscone Center buildings, and attendees simply had to tap their badges and complete easy quests (such as using the cool “Einstein” sunglasses to view the new CRM) in order to earn prizes.

For every attendee who completed the Quest, a $50 donation in support of Girls Scouts, College Track and Upwardly Global was put towards a $1 million fundraiser to help unlock equality through education and jobs.

During the Success Cloud keynote, singer Luis Fonsi performed a mini-concert (including “Despacito,” the world's most streamed song of all time) while screens displayed a number to text in order to donate money toward the hurricane recovery efforts in Puerto Rico.

Attendees also raised $15 million for the UCSF Benioff Children's Hospitals during Dreamfest, Dreamforce’s special evening event. Even the Salesforce Store was included, with attendees urged to round up their purchases to the nearest dollar to support the National Park Foundation.

From a logistical standpoint, Dreamforce was incredibly well-executed, from setup to coordination.

In keeping with the theme of Trailblazing, various areas were set up to mimic the feel of being in the great outdoors. The keynote rooms featured projections of leafy green forest-like backgrounds and the columns that are the bane of any event manager’s life were transformed into majestic redwood trees.

The keynotes were set up as an “in-the-round” style, or in this case, “in-the-square.” A central stage was surrounded by four sets of seating areas and four large screens with dual projection, ensuring that no matter where you were seated you’d be able to see at least one screen.

While entering and exiting the keynotes in Moscone West did have its hazards (being herded up and down escalators in a tightly-packed swarm of face-level backpacks), overall the crowds never felt as large as I knew they were.

In addition, the conference offered charging areas, lounges and a meditation zone. Although it would be impossible to accommodate everyone who needed to charge up their phone, it felt like the show organizers were trying to do as much as they could to make the attendee experience a positive one – truly embracing the spirit of Ohana.